Nowadays, cutters compete for millions of dollars in prizes.
It wasn't always that way.

A nineteenth century cowboy transplanted to the present day would probably be perplexed by the modern world's high-tech marvels. But he'd still feel right at home at a cutting horse show. 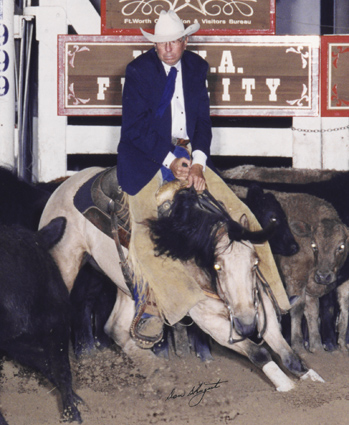 When American cowboys of the 1800s began using their best horses to separate individual cows from a herd, it was part of the daily job. They would never have imagined cutting as one of the world's most popular equine sports. But each year, thousands of cutting events--from Austin to Australia--attract riders aged eight to eighty.

Cutting's heritage runs strong and deep, like the centuries-old mesquites that flourish on the Texas plains. From Chisholm Trail to present day, cutting horses have been indispensable tools in the cattle trade.

During the era of the open range, cattle from one outfit often drifted and mingled with those of other outfits. Twice a year, in the spring and the fall, neighboring ranchers would join in a roundup to sort out their brands.

Every outfit traveled with a remuda of horses. Within the remuda each cowboy had a string of horses, some of them more suitable for one job than another. For instance, a cowhand needed a steady mount to patrol the herd during the night, but in the morning he could ride last year's bronc to the far reaches of the roundup circle.

The cutting horse was an elite member of the remuda. A typical cutting horse might have started out in a cowboy's string, but his sensitivity to cattle brought him to the attention of the roundup boss. He was the horse that pricked his ears toward a cow and followed her with his eyes. He instinctively knew not to crowd her, yet was wary of her every move. He made the difficult job of separating cattle easier and quicker. He even made it fun.

"It was worth the trip to brush country just to sit above Ol' Gotch and feel his shoulders roll, watch his ears work and his head drop low when he looked an old steer in the eye," said cowboy humorist Will Rogers after a visit to a South Texas ranch during the 1920s.

As big cattle outfits gave way to small farms and ranches in the twentieth century, pickup trucks and squeeze chutes took the place of cow horses. A few large ranches still rounded up cattle the old-fashioned way, but cutting horses were fast becoming obsolete. Today, the National Cutting Horse Association has given the cutting horse new life in one of the world's most exciting equine events.

The first advertised cutting contest was held at the 1898 Cowboy Reunion in Haskell, Texas. Fifteen thousand people, lured by ads in the Dallas News and the Kansas City Star, attended. Since the nearest railroad was fifty miles away, they came on horseback, or by wagon and hack.

The cutting contest offered a prize of $150, a substantial sum in those days, and 11 riders entered. Old Hub--whose fans swore that he could work blindfolded and without a bridle--was brought out of retirement by Sam Graves for this one event.

Graves primed the 22-year-old horse with oat mash and prairie hay, then he tied Old Hub to the back of a hack and led him all the way to Haskell--a two-day journey. It was a trip into the history books, and Graves set aside half of his winnings to ensure Old Hub had the best of care for the rest of his days.

The first record of cutting as an arena spectator event came at the Southwestern Exposition and Fat Stock Show in Fort Worth, Texas, when a cutting horse exhibition was added to the annual rodeo in 1919. It became a competitive event the following year.

By 1946, there were so many cutting horse contests being held, under so many different sets of conditions and rules, that a group of 13 cutting horse owners met at the Southwestern Exposition and Fat Stock Show and decided to form an association to establish standard rules and procedures for holding such competition.

One of the founders, Ray Smyth, said, "When the meeting broke up, we had formed what we thought would be more or less a local cutting horse association. Someone remarked that with luck, we might even get as many as 50 members by another year."

Later, at a meeting in Mineral Wells, Texas, the association was incorporated, and Pat Dalton suggested the name ‘National Cutting Horse Association,' because it looked as though it had the potential to grow into something big.

Smyth recalled that secretary-treasurer Volney Hildreth guarded the association's resources "with a big stick. If we wanted anything that cost money, Volney would tell us to get enough new members to pay for it."

When NCHA was formed, most cutting horses were ranch geldings like Old Paint, a brown and white horse of unknown parentage that Smyth bought for $40 at Weatherford trade days. Old Paint became one of cutting's first champions.

But some of the big ranches had been breeding their own horses for years. The world famous King Ranch had a remuda of copper-colored horses descended from the Old Sorrel. Yellow Jacket horses, with golden coats and black manes and tails, filled the Burnett's Triangle Ranch pastures; while the Pitchfork outfit was known for cast-iron cow ponies sired by Grey Badger.

By 1963, the association recorded the results of 727 events, of which 504 were recognized as NCHA championship events. In those days, cutters vied for a piece of $404,183 in prize money. That included $23,225 paid out at that year's NCHA Futurity.

Fast-forward to 2006, and the contestants at the NCHA Futurity will be divvying up more than $3.7 million--over a hundred times the offering of that first year. Total purses at NCHA-approved shows now exceed $39 million annually.

Yet for many, cutting's greatest rewards are intangible. The bond between people and horses that makes the sport so special, also links it to the sweat and dust of the Old West, and sets it apart from all other events.

"The people who brought cutting from the open range to the arena, and turned the skills of the cowman and cowboy into the contest, were real sports," said Buster Welch, a legendary cutting champion. "That fine sportsmanship is still alive and well in cutting today."