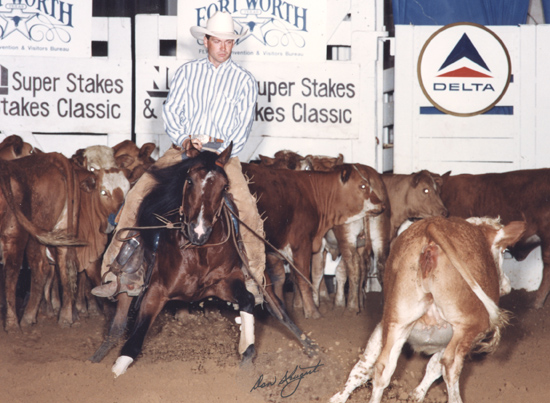 Lenas Telesis came to the 1991 Super Stakes with some unfinished business. Shown by Doug Jordan for California real estate developer Jimmie Rogers, the bay stallion had won the semi-finals of the NCHA Futurity with 221 points and was the co-reserve champion of the Memphis Futurity, but a major win had eluded him.

“We were really fortunate to win the semi-finals in the (1990) Futurity, and I felt like we were really ready in the finals,” said Jordan, who had won the 1990 NCHA Super Stakes Classic riding Cols Lil Pepper. “But when I drove out (in the finals), the first move the cow made was hard and quick, and Telesis faded off quick. It kind of surprised me, but I really liked the way he recovered and handled everything after that. I felt I could have done better, but there’s always another time.”

Lenas Telesis finished eighth in the NCHA Futurity, but earned a shot at the 1991 Super Stakes championship title, when he won the second go-round with 219 points, and split fifth place in the semi-finals.

“It was basically a 215 or 216 run,” said Jordan of Lenas Telesis’ semi-finals performance. “But the very last cow was extremely tough and my horse was ready for her.”

Smart Play, the first horse to work in the Super Stakes finals, set the mark with 216 points and kept the lead until Lenas Telesis, who drew deep in the second set, went to the herd.

“I didn’t go in there aggressive because they were judging low and being critical of any kind of mistake, so I went in conservative,” Jordan said. “I just wanted to go in and have a clean run and let him do his thing. It worked out well. It’s not every day that a 217 wins the deal, but the cattle weren’t helping us much either.”

The 1991 Super Stakes was not Jordan’s first success. In 1988, just his third time to be entered in an NCHA Futurity, the 26-year-old relative newcomer won all four go-rounds, one of only two riders to ever do so. Riding Cols Lil Pepper in a snaffle bit, Jordan showed the Colonel Freckles son to scores of 223 and 221.5 points in the go-rounds, 222 points in the semi-finals, and 221 points in the finals, where they tied Smart Little Senor and Bill Freeman. While Smart Little Senor won the sudden death work-off, the first in NCHA history, Bill Freeman was among the first that night to acknowledge Jordan and Cols Lil Pepper for their accomplishment.

“Doug Jordan was the crowd favorite and rightfully so,” said Freeman. “He did a splendid job showing his horse all week, and he has a fantastic colt. But luck wasn’t with him in the work-off.” It was Bill Freeman’s father Shorty Freeman, showing Doc O’Lena in 1970, who was the first rider to win all four NCHA Futurity go-rounds.

Doug Jordan was inducted into the NCHA Riders Hall of Fame in 2000, and gradually over time, he and his wife Amy have transitioned from competitively training cutting horses to a successful program of working with horses and riders of all backgrounds and disciplines to improve their skills.

To read more from Sally Harrison visit her blog at sallyharrison.com